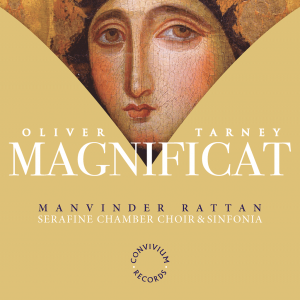 This is sublime music! Grabs your attention and takes you on a profound and beautiful spiritual journey in sound. A wonderful project bringing many musicians and singers together to create something extraordinary. – Will Todd

‘My soul doth magnify the Lord’ usually elicits the most exultant of musical reactions from most noted composers. This one, however, offers a more human response and in a style which touches one’s soul in an exceptional manner. Picture this: Mary is 16 and living in ancient Judea. Tarney is not convinced that the news that she was to be the mother of God, out of conventional wedlock, would have necessarily made her heart leap with joy in the first instance.

In this newly-commissioned work in 12 movements, Tarney has interpolated the conventional text from the Gospel of Luke with apocryphal and old Testament texts as well as extracts from the Book of Maryam from the Qur’an. The fuller picture this paints completely changes the way we think of this important bible story and Tarney sets the whole with memorably exquisite musical colours which bow to no one. In a world riven with division and violence based on religious lines, this piece reminds us of what we could have in common if we looked a little harder.

Scored for string orchestra, choir, string quartet and soloists, Tarney’s Magnificat was premiered in the chapel of Keele University, as part of Sing for Pleasure’s Golden Anniversary Summer School in 2014 and is to be published by Sing for Pleasure this autumn (2015).

Your cart is empty